James, 48, was back in the kitchen to provide yet more culinary advice to This Morning viewers to kickstart the week. Phillip Schofield, 58, and Holly Willoughby, 39, were watching on as the chef gave his first demonstration, cooking up a stew and dumplings for the ITV presenters. However, the cook then apologised as the host was gobsmacked the guest had brought his own pans into the studio instead of using the ones available. As the cooking guru explained himself, he then revealed he might have broken studio rules by having his phone on set.

The presenter first noticed James had brought his own utensils into the studio when the chef put his meat to rest in a red, pumpkin-shaped pot.

“They’re from home and I’m going to make an apology, actually,” the cook went to say, before Phillip called him out.

“You brought your own pots?” he asked, to which the guest replied: “I brought my own pots in, yeah,” before explaining how he’d “broken the rules”.

“At 10 past six, a phone beeped in the studio and that was me – very unprofessional – I left my phone in here.

“This was because my mother knew I was cooking this dish and she text me to say, ‘Please make sure when you’re doing this, you don’t make the dumplings too dry’.” 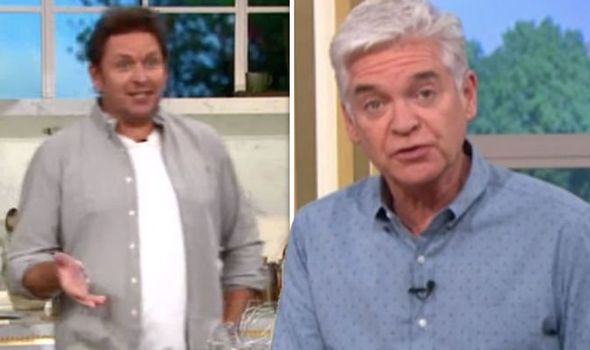 Holly then asked her guest and the Saturday Morning cooking show host: “Who makes the best dumplings – you or her?”

The chef gracefully told the presenter this mother cooked them better than him, although Phillip told James’ mother who was watching at home her son hadn’t served up any dry dumplings.

Following his apology, the culinary genius then carried on with the rest of his first demonstration of the show.

Once again, viewers took to Twitter to comment on how much butter the chef had included in his recipe for the dish.

I’m going to make an apology

As well as using beef fat to make the dumplings and the meat in the stew, James boiled some carrots in a blend of oil and butter.

Voicing their astonishment on the social media platform, one viewer wrote: “A little bit of butter, James?! Face with tears of joy Butter #ThisMorning,” followed by a laughing face emoji.

Another posted: “Don’t know why @Schofe was so shocked at the amount of butter put in with the carrots there. Surely everyone knows James Martin loves his butter! #ThisMorning.”

However, others were delighted by the chef being back in the kitchen, as a third commented: “James Martin is a top bloke. Class chef #ThisMorning.”

“I have a real soft spot for James Martin. #thismorning,” a fourth chimed, with a fifth asking: “Pretty please… where are James Martin’s beautiful saucepans/pots from? #ThisMorning.”

It was reported last week the chef had quit social media after another cooking demonstration went a bit array.

His decision came after the chef half a 90-minute virtual cooking class on Saturday, October 3, 2020, to allow fans to prepare a three-course meal with his help.

Unfortunately, as the event got underway, the cook along was hit by a number of technical errors, leaving viewers “frustrated”.

The chef then took to Twitter to announce his break from social media following a backlash over the virtual cook along.

James wrote: “Having seen some of the comments posted online regarding last night’s cook along and the anger towards me given the technical issues that the production team were having, I would like to apologise again for this and I will be chasing up with Live Nation, the production company IT team and all the people they hired, to find out the problem.

“Having said that, this is a small comfort to some of you online who are quite rightly angry at me. I promise I will be speaking to them tomorrow, I wasn’t involved in the IT side of things and know little about it, but will get all the issues raised and sorted as much as I possibly can immediately.

“To the rest of you who had a good night, thank you, but due to the large amount of vile comments posted directly towards me, this will be my last post as I will be taking a break from posting personally and all social media for the foreseeable future.”

Walmart's anticipating civil unrest ahead of the presidential election ... and that's triggered the retail giant to stop pull guns...

Travis Roy, the former Boston University hockey player who was paralyzed during his first game and went on to become...