Jeremy Vine wanted to know if viewers of his show would be following the mandatory guidelines and if they agreed with the advice given on wearing face masks. However, he was forced to jump to the defence of the show’s doctors when one caller claimed they had given completely different advice to the government.

Linda from Kent began: “A few weeks ago we were being told masks weren’t this miracle thing.”

“On this show,” Jeremy agreed as Linda continued: “Yes, I think your doctor who comes on.”

But it was then that Jeremy jumped to the defence of Dr Sarah Jarvis.

He hit back: “Well not just Sarah but the virologist Chris Smith as well. 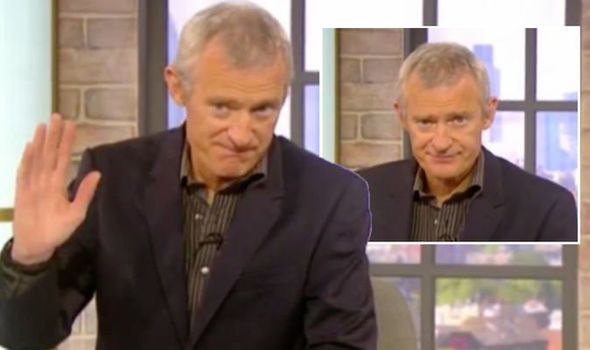 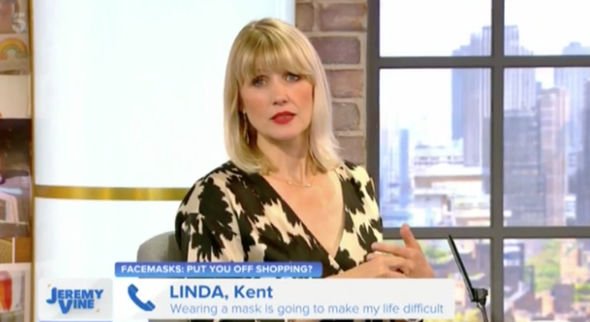 “But I will tell you why, just to defend them, I will give you five reasons.

“Number one, at the time we had a shortage of masks in the health service so the worry was if you tell the population to wear one you’re going to make it worse.

“Number two, you will have noticed Linda, when people are wearing a mask, you can’t hear what they are saying and you need to put your face really near to their face.

“Then there’s all this thing about you touching your face more and then there’s this new thing of chin masks where people wear them around their chin. 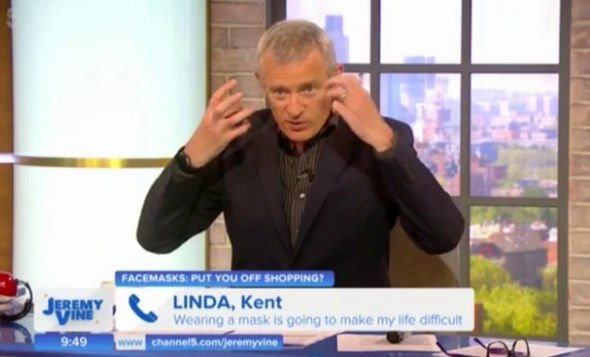 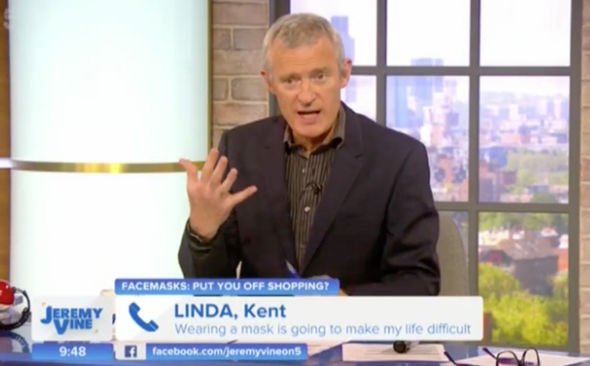 “People don’t wear them right, so for all of those reasons Linda, and they still might not be a good idea.”

But Linda cut in as she tried to explain her concerns further.

“Can I just say Jeremy my son has gone to work today – he works in Tesco – wearing a mask for the first time because they’ve been told they’ve got to,” she replied.

“But for 18 weeks he hasn’t had to and I worry about it more today than I have for the past 18 weeks.”

DON’T MISS…
Face mask rules: What shops do I have to wear a face mask in? [LATEST]
Naga Munchetty loses it with Helen Whately on BBC Breakfast [VIDEO]
Face masks: Shoppers FURIOUS at supermarkets who do not enforce masks [INSIGHT]

However Linda didn’t get to elaborate further as Jeremy abruptly cut her off to move on to the next caller.

“Okay Linda,” he said holding his hand up to the camera. “Thanks so much.”

On Twitter there was much debate about the subject of face masks with viewers divided over whether or not they should be mandatory.

One viewer shared: “People working in the NHS wear them constantly during a 12 hour shift and manage to input information into computers, take blood, make beds. I’m sure you can cope with 10 minutes wearing one in a shop to buy a bread roll.”

Defending the use of face masks, another shared: “Shielders will be allowed next month would you be happy if one of your loved ones who’s desperate to go out still can’t because of selfish individuals that simply refuse?

“If you feel uncomfortable simple stay at home & let those who want to try to get some normality back carry on.”

A third posted: “Im not keen to wear one but I will if it means i can go out, however you said businesses have said difficult to enforce? Dont they already enforce how many people are allowed in a shop, i cant see why this cant be enforced the same. #dontmakemoreproblems.” 18 Aug 21
And then there were five. Malia Pyles (Baskets) and Zaria (black-ish) have been tapped to…
TV & Movies
0