BBC Weather: Kirkwood forecasts showers in parts of the UK

It was rather an orderly morning on BBC Breakfast without much of the usual jovial chat between the presenters. But at one point, Naga Munchetty couldn’t help but make a cheeky comment towards Carol Kirkwood. The meteorologist was on location in St Albans, delivering the weather forecast and weekend outlook from the middle of the forest. During her reports, she told viewers some information and facts about the local area and Naga noticed how interested she seemed, suggesting they leave Carol in the forest.

Charlie Stayt began: “Let’s have a look at the weather, Carol’s there for us this morning. Morning Carol,” and Naga chimed: “Morning Carol.”

“Good morning!” the cheery weather reporter exclaimed. “Look where I am, isn’t this just gorgeous. Langley Wood which is part of Heartwood Forest in Hertfordshire, we’ve come in amongst the bluebells.

“Now earlier, Kev our cameraman tweeted some footage of the bluebells which hopefully we can show you close up.

“And it’s worth noting, in recent years, over an acre of bluebells have actually been lost here and that’s the equivalent to half the size of a football pitch because people have wandered off the paths and trampled them. 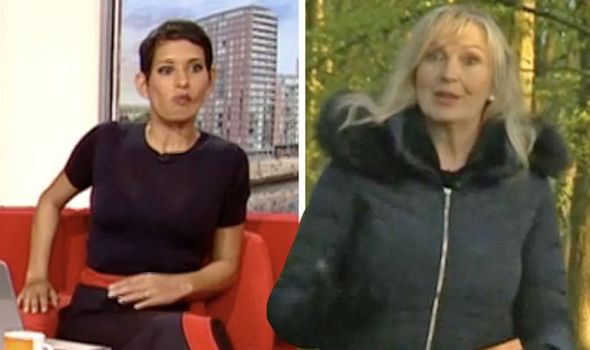 “And did you know, a fifth of the world’s bluebells actually grow in the UK and that the UK is internationally significant for its growth of bluebells?

“I don’t know that – you learn something new every day!” Carol added.

“Now it’s a chilly start to the day here in Hertfordshire, temperatures were minus five degrees celsius when we arrived and wherever you are today, it’s a cold start and also a frosty one.

“The forecast though is a mainly dry one with a lot of sunshine,” those watching at home were told. 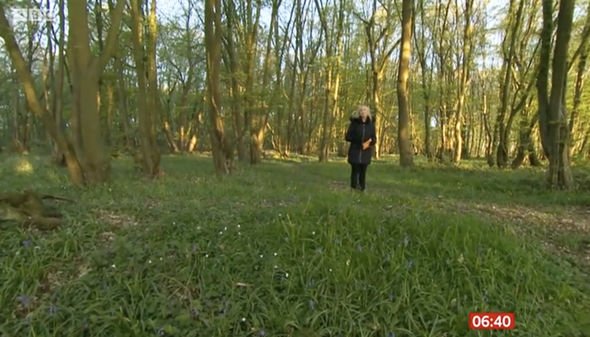 “As we go through the course of the day you will find there are more showers coming across from the sea, high pressure is still firmly in charge of our weather, things fairly quiet and fairly settled.”

The report continued and when she passed it back to the studio, Naga said: “Carol you’re absolutely right, it’s always lovely learning something new every day and for you to do that in those beautiful surroundings, hey how fortunate are you this morning.”

“We might just leave you there since you like it so much!” Naga commented and Carol didn’t have a reply.

DON’T MISS…
Antiques Roadshow expert on why gold bottle could be worth double [VIDEO]
Dick Strawbridge admits he and Angel are ‘in trouble’ [COMMENT]
Jo Davidson’s brother ‘exposed’ as Jimmy Lakewell in Line of Duty? [THEORY] 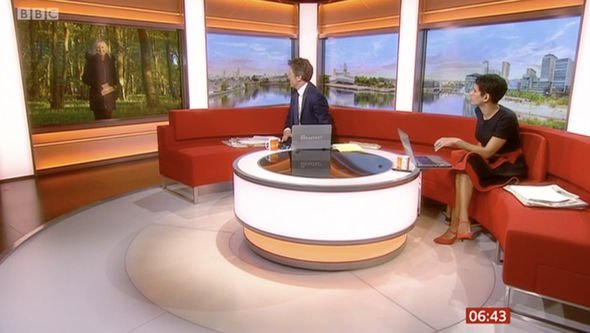 After another weather update later in the show, Carol discussed some of the footage they were showing.

“Look at this aerial view, it is stunning!” she remarked and Naga said: “Just so pretty.”

Carol went on to explain: “What you’re seeing is actually Heartwood Forest as a whole and the bit that we are in is Langley Wood.”

The presenter suggested: “Don’t get lost in the woods Carol, always follow the trails.”

Carol stumbled with a reply: “Good plan, thanks Naga.”

“My pictures do not do the bluebells any justice. They look so beautiful in the early morning sunshine,” she wrote.

She also shared a picture of the sunrise she witnessed while on location with her fans.

BBC Breakfast airs every day at 6am on BBC One.

Porsha Williams just announced her engagement to Simon Guobadia. On her Instagram account, the Real Housewives of Atlanta star showed...