The historical drama depicted the many challenges the Ingalls family faced in the late 1800s, with many hard-hitting scenes taking place on one particular set.

The Ingalls’ house was literally a ‘Little House’

Grassle had a background in soap operas and theater when she was recruited to play Caroline. Accustomed to wide open stages, she had to adjust to the smaller sets on Little House, including the iconic Ingalls’ cabin where many of the family scenes took place.

“The authentic size of the Little House… was little,” Grassle wrote in her memoir, Bright Lights, Prairie Dust. “The way the walls and ceiling could fly open to make space for camera, lights, and crew. On soaps I had shot in New York, the sets were more like theater with three-sided walls, the camera positioned as if they were the audience.”

“This set opened like a doll house and was reassembled with hinges so the camera could move in and around it, able to shoot as many angles as possible,” Grassle noted. “The Little House would be a warm place, where the table held platters of scrambled eggs, family discussions took place over rabbit stew, and Pa’s fiddling inspired the girls to dance in front of the cheerful fire.” 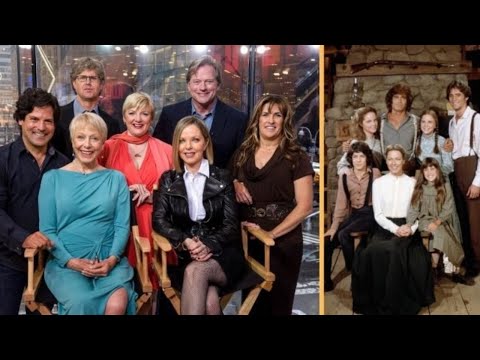 With the series set in the 1870s, a good deal of the show’s subject matter explored various trials and tribulations of that time period. Grassle described a particular area of the set where distressing news was often given or a calamity would strike.

“One third of the double-sized stage was curbed off and filled in with dirt,” the Little House alum explained. “Within that area stood the barn. As the scripts developed, the barn became the dark place on the prairie.”

Grassle listed just a few of the more tumultuous scenes that took place in the barn location.

“[It was] the place where one night Mary would start a dangerous fire when she secretly wanted to study after bedtime,” Grassle recalled. “Where Caroline, during a thunderstorm. would try to rescue a wayward cow and faint. Here, standing by the fence, Charles would tell Caroline that Mary was going blind.”

RELATED: ‘Little House on the Prairie’: Karen Grassle Recalled Her ‘Baptism by Fire’ When She Forgot Her Lines

‘Little House’ storylines got a bit too dramatic

Landon’s commitment to portray the gritty realism of prairie life continued throughout the show’s nine seasons, though Grassle felt the storylines went a bit too far as time went on.

“Some of the stories had become a real stretch,” she remarked of the series’ later seasons. “Between a blind school fire burning up Alice Garvey (Hersha Parady) and Mary’s baby, and then a rape script, we seemed to have lost our way.”

Little House ended with a TV movie special, The Last Farewell, which aired in March 1984.