Machine Gun Kelly wasn’t afraid to get knocked around for the sake of humor in the brand new ‘Jackass’ trailer. The singer bounced back pretty quickly though!

Don’t try this at home! Machine Gun Kelly, 31, is one of many fresh faces who joined the cast of Jackass Forever in the newest trailer for the painful comedy. The musician, whose real name is Colson Baker, was featured riding a stationary-bike, and getting knocked into a pool by a giant hand in the trailer, released Tuesday July 20. Even though it looked like it definitely hurt, the Tickets to my Downfall singer looked like he had a blast doing the dangerous stunts.

MGK was featured pedaling poolside, competing against another one of the Jackass stars in front of two giant hands. MGK was wearing biker shorts and a neon green shirt. “The faster you pedal your bike, the faster the other guy’s hand goes back,” one of the cast members said in the trailer. Unfortunately, it doesn’t look like the “Bloody Valentine” singer was fast enough, as he got knocked right off his bike. As he toweled off, MGK laughed, but said it hurt more than he expected. “You said it wasn’t gonna feel like anything,” he said in the trailer. 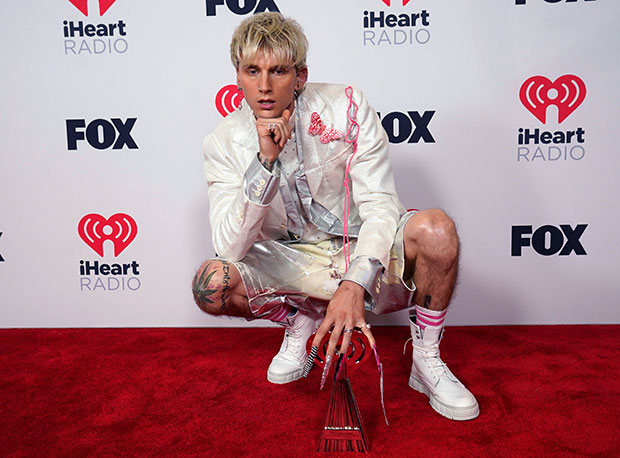 Besides MGK, the Jackass Forever trailer boasts plenty of familiar faces from the first three movies, like Johnny Knoxville, 50, and Steve-O, 47, and lots of newbies. Stars like Eric Andre and Tyler, The Creator also make appearances in the trailer. Tyler looked like he got shocked while wearing a white tuxedo, and Eric got knocked back by an inflatable as he got a coffee from a food-truck. Other than celebrities, the trailer does consist of the typical shenanigans that you’d expect from the Jackass crew, like exploding toilets, amateur bull-fighting, and other death-defying stunts.

Even though MGK’s appearance in Jackass Forever looks like it’s ridiculous, the musician seems like he enjoys high-energy activities. MGK regularly rides around on his motorcycle, taking his girlfriend Megan Fox, 35, and daughter Casie, 12, on rides. Jackass is also far from his first movie. He’s had parts in The Dirt and The King of Staten Island. Most recently, he appeared alongside his girlfriend in the movie Midnight in the Switchgrass.