Kate Winslet’s opening up about Mare of Easttown. Following the finale episode, “Sacrament,” that aired on May 30, 2021, Winslet revealed which scenes were “really hard” to film. Hint: Her answer doesn’t include that heartbreaking scene with Julianne Nicholson (Lori Ross) and Cameron Mann (Ryan Ross).

[Spoilers for Mare of Easttown below]

Kate Winslet plays a small-town detective on ‘Mare of Easttown’

Not only is Winslet an executive producer on Mare of Easttown but she’s also the star. The award-winning actor plays Mare Sheehan, a detective in the small Pennsylvania town of Easttown. Recently divorced, Sheehan navigates her personal life while trying to discover who killed Erin McMenamin (Cailee Spaeny).

While she questions her friends, family, and neighbors alongside Detective Colin Zabel (Evan Peters), Sheehan’s relationships with her live-in mother, Helen (Jean Smart), and teenage daughter, Siobhan (Angourie Rice), are complicated by her son’s suicide. 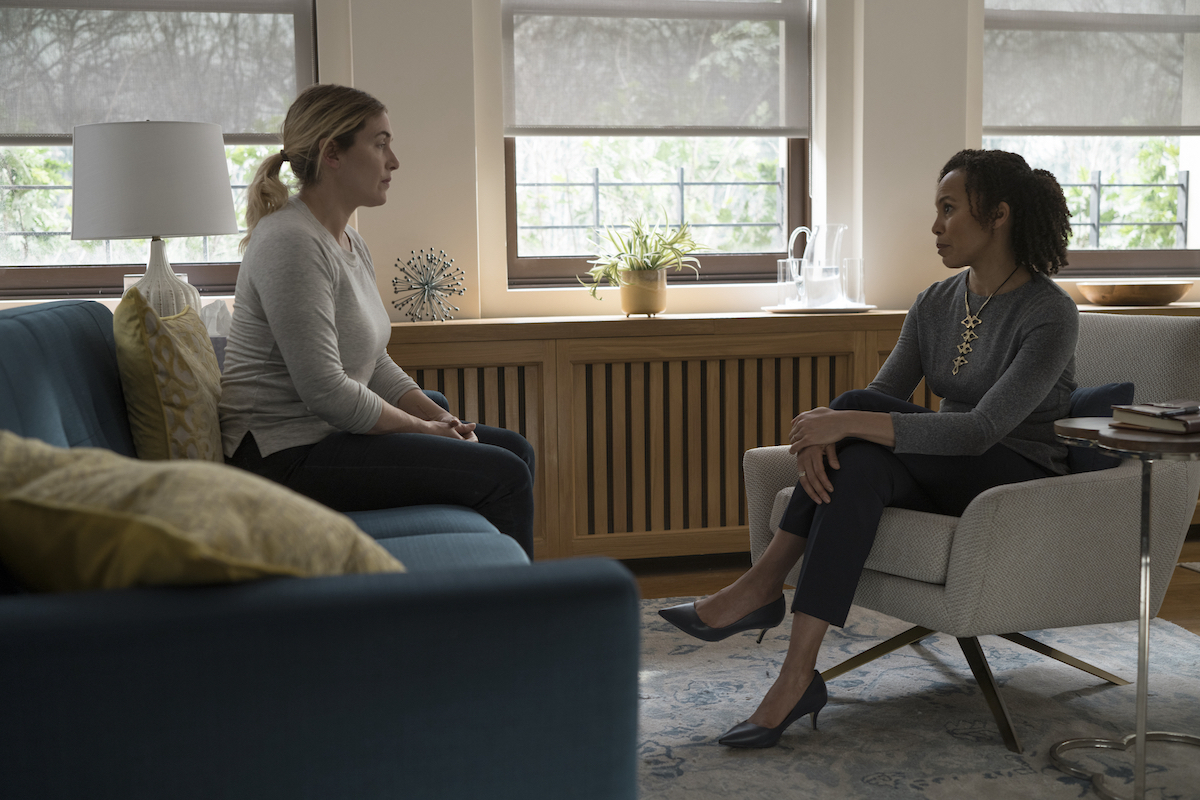 Mare of Easttown begins approximately two years after the death of Sheehan’s son, Kevin (Cody Kostro). Raising Kevin’s son, her grandson, the detective still hasn’t grieved the loss. She hardly ever mentions Kevin’s name and doesn’t acknowledge the pain she’s in. That is, until she goes to therapy. Those scenes, where Sheehan talks about her life with a therapist, Winslet called “really hard” to film.

“It was tough, knowing how to regulate my emotion in that scene, because it was all there,” she told IndieWire in June 2021, referring to the moment Sheehan started talking about Kevin. “But I still had to hold so much of it back. That’s not what Mare would have done. She wouldn’t have collapsed in a sobbing heap. It’s all there, but she’s fighting it, fighting it, fighting it, because that’s who she is.’

“So it was hard,” Winslet added. “All of those scenes were really hard.”

Does Winslet want to revisit Sheehan, all that flannel, and her Mare of Easttown accent? Yes. Practically since the day the limited series premiered on April 18, 2021, fans have been wondering if Mare of Easttown Season 2 will happen.

Created as a one-and-done type of program, the show’s future has been uncertain. However, one thing is for sure. Winslet “would love” to return. She told TV Line in a May 2021 interview she’d be up for reprising her role.

“I would absolutely love to play Mare again,” Winslet said when asked about the possibility of a second season. “I miss her, I really do. It’s the strangest thing. I feel like I’m in mourning. It was an absolutely wonderful role.”

“There’s something very addictive about Mare because she’s so outrageous and lovable and brilliant and real,” she added. “I loved playing her.”

At the time of publication Mare of Eastown’s future is still unclear. Watch all seven episodes on HBO Max.