Netflix’s US subsfell by 126,000 to 60.1 million paid memberships, down from 60.2 million in the previous quarter — the first time ever that Netflix’s domestic sub base has shrunk rather than grown, per the company’s Q2 2019earnings reported Wednesday. 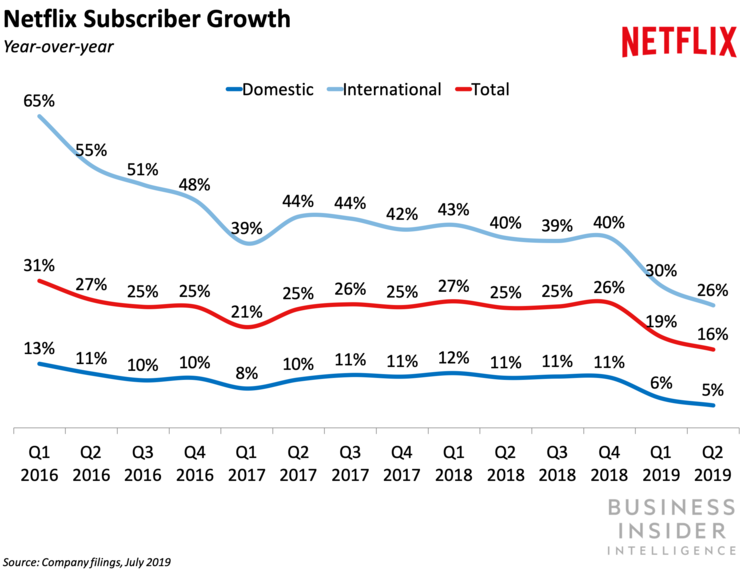 Netflix did add 2.8 million international subs, but its growth abroad decelerated to 3% quarter-over-quarter in Q2, down from 10% QoQ in both Q1 2019 and Q4 2018. We discussed the loss in more detailhere.

This is a blip in what’s likely to be a long growth trajectory for the streaming giant — but there will be more subscriber fits and starts as the streaming wars escalate. As we highlighted yesterday, customer acquisition and churn are significant hurdles for SVOD services.

The nearest meaningful comparison is pay-TV: Although pay-TV is now seeing losses from cord-cutting, pay-TV is reputably low-churn, partially because it’s difficult to cancel service and equally as frustrating to sign back up. But DTC streaming services are much easier for consumers to cancel and restart.

That this is the first quarter ever that Netflix has reported a drop in users likely means it’s still far ahead of competitors, but it’s hard to tell because no other SVOD service is yet subject to the same kind of public reporting. Still, it’s likely that Netflix has a low churn rate compared with others: Netflix has the highest renewal rate, at 93%. Amazon Prime Video and Hulu are next highest at 75% and 64%, respectively,per Lab42. That’s enviable stability, and new direct-to-consumer entrants like Disney+ and HBO Max will soon more publicly chase such consistency too.

As new entrants come to market, in a strange about-face, Netflix will be the incumbent that traditional media giants are disrupting, and its only way add to subs despite that is with more high-quality content. Traditional media companies like Disney, WarnerMedia, and NBCUniversal are pulling high-value content from the platform to reserve for their own forthcoming services.

In response, Netflix has been spending more to develop its own or co-produce more original content, including local-market fare. Netflix Originals, branded as such, help to make the Netflix brand synonymous with high-quality original content. And as those originals, like “Stranger Things” or “Bird Box,” make significant cultural imprints, they drive sign-ups and encourage retention. But as competition ramps up, Netflix’s content imperative will become even greater: Consumer perception can swing wildly and rapidly, and it impacts whether subs come, stay, or go. 17 Jun 21
This month marks a milestone for one of the most underrated Disney films. The Rocketeer…
TV & Movies
0