Many viewers had been convinced they didn’t have too long to wait until “Droughtlander” was over for another run, with hopes Outlander season five would hit screens between September and November later this year – as was the case with season four.

Unfortunately it has now been revealed the show won’t return until “early 2020”, following a decision taken by STARZ network boss Jeffrey Hirsch.

Chief operating officer Hirsch dropped the bombshell at the Television Critics Association summer press tour in front of a room full of reporters on Friday.

Production on the latest series of the Amazon Prime Video time-travelling epic began in May and was announced by an excited video showing the main cast – including Caitriona Balfe, Sam Heughan, Duncan Lacroix, Sophie Skelton and Richard Rankin – working on one of the show’s many outdoor scenes.

Hirsch said: “The delay is mainly due to scheduling at the network.

“The decision behind everything that we do in terms of our programming schedule, obviously, is based on delivery schedules.

He continued: “We try to have something on the air to serve that premium female audience.

“So we have some shows coming before that serve the Power audience.”

Immediately flocking to Twitter to discuss the choice, fans couldn’t hide their disappointment.

“I hate that in some countries #Outlander took forever to come to TV I really felt for some of the fans,” one person wrote. 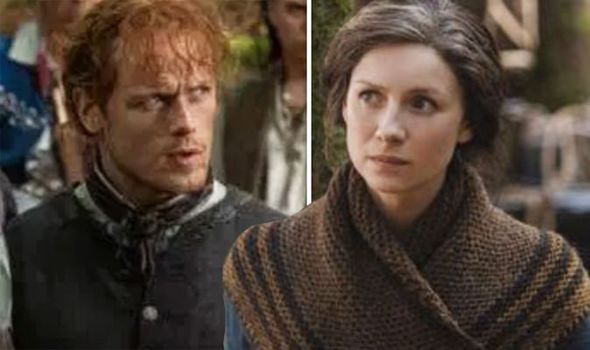 “I have to wait until spring of 2020 before watch Outlander damn I hate waiting. #outlander,” another posted.

While a fourth countered: “Best news. Earlier than I expected! Bring on Sn5 #Outlander.”

“This was the best news I’ve heard all week. I love #Outlander and can’t wait to see more!!” a fifth agreed.

Others continued to share their frustration as one one person declared: “Outlander fans, this Droughtlander is going to take longer than I thought. #Outlander #STARZ #Droughtlander.”

“Hi Matt! Thank you for working hard to bring us more #Outlander Can’t wait to see what Jamie does about Murtagh! #cliffhanger #S5,” another commenter praised executive producer Matt B. Roberts.

The entire family will be reunited as Brianna Randall Fraser (Sophie Skelton) brings up her baby with Roger.

But while Claire (Caitriona Balfe) and Jamie are delighted to continue building on their new life in North Carolina and at Frasers’ Ridge, there will be trouble along the way from fresh enemies and fractured allies.

Outlander season five will return to STARZ and Amazon Prime Video in 2020.

26 Aug 22
Luca Guadagnino has no problem with sequels coming decades after their original predecessors. The “Bones…
TV & Movies
0