Working in English for the first time, Japanese auteur Sion Sono’s greatness gets lost in the translation 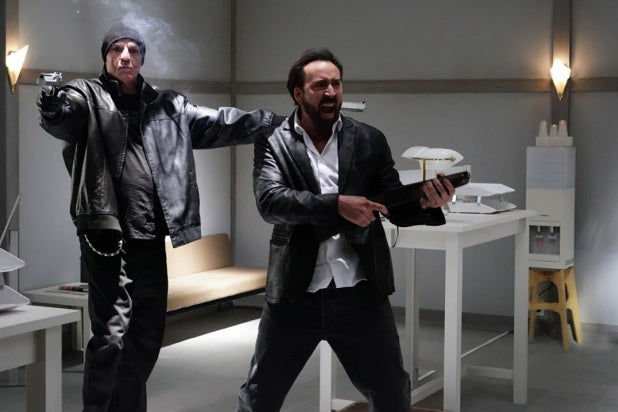 This review of “Prisoners of the Ghostland” was first published after the film’s January 2021 premiere at the Sundance Film Festival.

Prolific and wildly eccentric Japanese auteur Sion Sono has spent most of his career at the dizzying point at which arthouse bravado meets grindhouse gonzo, and his best films stretch the limits of narrative so far as to leave viewers simultaneously gobsmacked and exhilarated. It’s perhaps inevitable that he would cross paths with Nicolas Cage, an actor whose post-Oscar film choices have tended to veer into the grimiest edges of genre, resulting in a very mixed bag of delights and duds.

One might have hoped that “Prisoners of the Ghostland” — Sono’s English-language debut, starring Cage, and making its world premiere at Sundance — would have elevated Cage to Sono’s level, but unfortunately, it’s done the opposite. While the film far outshines most of Cage’s recent efforts (he was direct-to-VOD when direct-to-VOD wasn’t cool) in terms of art direction and fearlessly madcap storytelling, the results are nonetheless muddled and messy.

It’s impossible to recap actors-turned-screenwriters Aaron Henry and Reza Sixo Safai’s plot without sounding unhinged, but it basically boils down to a bank robber known only as Hero (Cage) being forced by corrupt, white-suit-wearing The Governor (horror legend Bill Moseley) to rescue The Governor’s “granddaughter” Bernice (Sofia Boutella), who disappeared after escaping his brothel.

To ensure that Hero will not harm her, The Governor puts him in a leather jumpsuit with strategically-placed explosives designed to control his behavior and to force him to complete the job in just a few days. Driving down the same highway Bernice did, Hero finds himself taken to the Ghostland, where everyone lives in fear of a clock that must be held in place, lest a nuclear explosion take place, one that can be prevented only if The Governor dies.

There are samurais and cowboys and 18-wheelers and zombies and convicts exposed to nuclear waste, and this all sounds far more entertaining in the description than “Prisoners of the Ghostland” manages to be in execution.

Not that the film doesn’t have Midnight Movie potential: The narrative is probably best served by audience members being not entirely awake or not entirely sober, the better to enjoy the sing-along scene, or the swordfight set to a mellow Jim Croce tune, or the part where Cage yells, “Karate chop you!” at a potential assailant.

Sono’s films certainly aren’t known for following a straight line from A to B — one of his greatest works, 2008’s “Love Exposure,” is a gender-fluid saga of superheroes and original sin and up-skirt panty photography that’s four hours long and never less than riveting — but this time around, there’s barely any internal logic or rules or even stakes to make this jumble of genre tropes remotely interesting.

The director’s gift for visual style is certainly on display, from a running motif involving gumballs to the cherry-blossom petals that rain down on the bordello compound, but it’s all in the service of a flat piece of storytelling. All the creepy mannequins and primary-colored flashbacks in the world can’t bring us into a story that just isn’t there.

RLJE Films is releasing “Prisoners of the Ghostland” in theaters on September 17. 1 May 21
Marvel’s recently-concluded limited series, The Falcon and the Winter Soldier, has been a big hit…
TV & Movies
0