REAL Housewives of New Jersey star Teresa Giudice's daughter Gia said she is "suffering" after Jackie Goldschneider's "untrue" claim that she does cocaine.

RHONJ fans will remember that during this week's fight – which started after Teresa claimed Jackie's husband was cheating on her – Jackie used an analogy where she claimed she heard a rumor that Gia was doing cocaine. 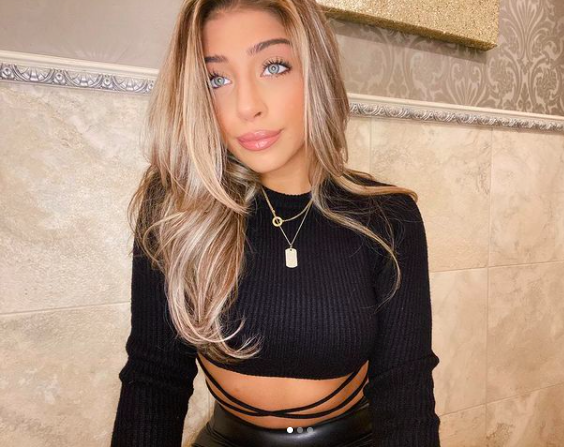 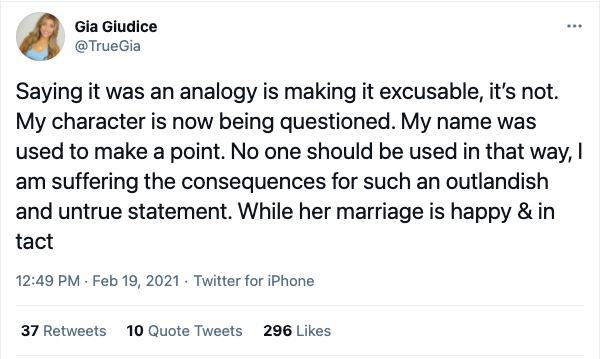 Gia, 20, finally spoke out against Jackie after she was used to make a point about how rumors can be hurtful.

The oldest of the Giudice girls wrote on Twitter: "Saying it was an analogy is making it excusable, it’s not.

"My character is now being questioned. My name was used to make a point. No one should be used in that way, I am suffering the consequences for such an outlandish and untrue statement.

"While her marriage is happy and intact."

Gia's tweet comes after she also shared a post where Teresa's business manager claimed Jackie needed to apologize to her.

The Instagram story read: "I don't comment on the show, ever … Mostly because opinions are like a**holes. But this needs to be said, heard and repeated.

"Gia is a wonderful, smart, strong, and beautiful human being and what was done to her tonight was wrong on so many levels. As a grown a** 'I'm so so smart I'm a lawyer' woman to bring Gia's name into an argument and place an accusation with such a weighted consequence is inconceivable.

"I cannot fathom what would possess someone to ceate a false narrative that could have a severe consequence for the innocent party involved, a 19 year old at the time who was in no way involved in anything.

"What the cast members choose to do to each other is the nature of the reality TV beast, this was too far. I hope apologies are made and I hope family sticks together on this one. I'd have a hard time supporting a friend who did that to my niece. #justsaying."

Teresa also shared the same post on her social media.

However, the Giudice girls weren't the only ones who slammed Jackie for her claims, which were not true.

Former RHONY star Dorinda Medley also spoke out when she watched the episode and wrote: "Jackie, the lowest of the lowest. Teresa, you are a survivor and I love you!"

She also shared: "Jackie, what were you thinking? #shameonyou #teamteresagiudice"

Former RHONJ star Dana Manzo also shared the same statement and slammed Jackie, saying: "I did not watch this but totally agree a GROWN woman should never use an analogy like this …

"Especially about our beautiful Gia. Jackie needs to make a public apology immediately."

Following the episode, Jackie tried to explain herself and shared on Twitter: "It's disgusting. That's my tweet. Just disgusting. Grow up."

She then shared a second one: "My analogy about Gia was simply an analogy – there was no truth to it of course. The rest of the cast understood this, which you'll see in the coming weeks.

"The behavior at my husband's birthday party is truly unfortunate – destroying a marriage and family is not entertainment."

Jackie being slammed on social media came after the premiere of RHONJ's season 11 where the two housewives butted heads over Teresa claiming that Jackie's husband, Evan, cheats on her.

Teresa spread the rumor during Evan's birthday party, which Jackie, 44, later wanted to address in a one-on-one conversation.

After Jackie explained in a confessional interview that she wanted Teresa to admit she had no evidence to back up the claims that Evan had cheated, she told her costar: "My marriage is beautiful. My family is beautiful.

"This weekend you took his name and what's most important to him in the world, being a great husband and father, and sh** all over it and you did it to all of our friends at his birthday party.

"I don't know if you made it up or if someone really told you, but you need to admit that whoever told you this doesn't know me and Evan and gave you no evidence of anything.

"You have to admit this was a lie."

Teresa argued it was "a rumor that I heard" and that she couldn't "say the person's name."

As Teresa continued to shut down Jackie's request to say the rumor was a lie, Jackie again pushed the longtime RHONJ star to admit her source had "no evidence."

Teresa responded: "I never asked for evidence. I'm just letting you know that somebody let this out there."

When Teresa once again refused to shut down the rumor that she "heard," Jackie made accusations against Teresa's 20-year-old daughter Gia.

However, these claims were not true as Jackie explained that she only said it because she wanted Teresa to see how hurtful rumors were.

Teresa angrily responded by calling Jackie a "f**king b**h" and stormed out of the room as she continued to cuss her out.