The Morning Watch: Growing Up in the 'Harry Potter' Franchise, The Realism of Spy Satellite Surveillance in Movies & More

Katie Thurston’s season of The Bachelorette kicked off with make-out sessions, silliness, and plenty of husband potential to go around. During Monday’s premiere episode, the 30-year-old bank marketing manager overcame her nerves as she met and charmed 30 men vying for her heart.

Before the limo introductions, Katie revealed that she’s never been in a relationship with someone who’s felt like her “partner,” something she said she hopes to remedy as she searches for her soulmate and looks ahead to an engagement.

Ahead of the premiere, Katie told ET’s Nischelle Turner what she’s looking for in a man.

“The biggest thing is he has to be passionate about life, for what he’s doing in life,” she said. “Definitely a good sense of humor. And then kindness. I think that’s a really big thing that people kind of overlook.”

It’s a journey Katie thought she’d go through alone amid Chris Harrison’s decision to step away from the franchise, but the newest franchise lead was delighted to find out that Kaitlyn Bristowe and Tayshia Adams were there to help her along.

“I was just very blessed to have Tayshia and Kaitlyn kind of help me through that journey. It’s something that I will forever be thankful for,” Katie told ET. “… They helped me from start to finish… They’d gone through it. [Their advice] really means something to me… It’s just that girl power and that bond.” 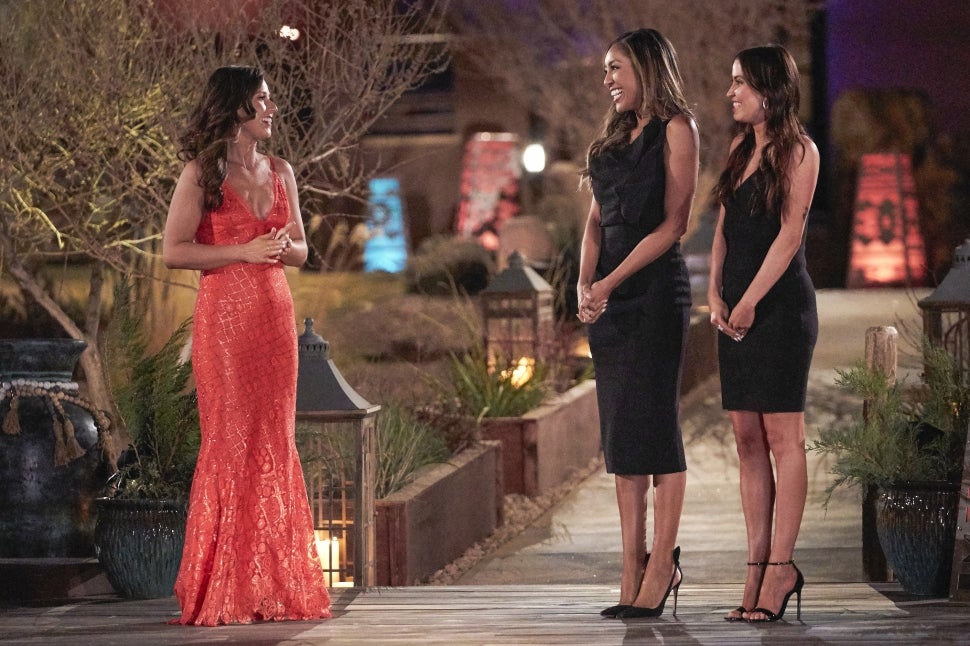 With Kaitlyn and Tayshia watching from nearby, Katie’s limo introductions began with Thomas gushing over his “deep admiration” for her, and only got more exciting when Tre showed up in a ball pit in the back of a pickup truck.

“I’m here to have a ball with you.… You’re a pretty baller Bachelorette,” Tre told Katie, much to her delight.

“You can’t deny the chemistry and the energy that he offers,” Katie told ET of Tre. “He just lights up a room.”

Tre wasn’t the only guy to think outside the box for his introduction. Andrew S. pulled up in a British car and a fake British accent, while Jeff went the opposite route, opting to arrive in his RV.

There was no shortage of sexual innuendo-filled introductions either — Cody introduced Katie to the blowup doll he was “intimate” with during quarantine, Justin said he’d “stroke it out” with his paintbrush while bored at home, and Christian arrived with genie lamp, telling Katie, “I don’t know if there’s a genie in here, but I’m hoping we can rub one out together” — which complimented Katie’s sex-positive nature.

“If a guy can’t accept me being sex positive or talking about sex, it’s just not gonna work out,” she told ET. “There are some people who are a little traditional and old school, but people around my age and younger, we’re here for it. It’s 2021, embrace your sexuality and be an empowered woman.”

Katie was perhaps most charmed, however, by Connor B., who showed up dressed up as a cat. “I think I’m in love,” Katie joked when she saw his outfit of choice, noting later that she’s “focused on Connor the cat.”

When things moved inside, the cat costume continued working for Connor B., who ended up having quite the make-out session with the Bachelorette.

“Connor the cat was the first name I remembered on the first night,” Katie told ET. “… I mean, he’s dressed as a cat. I think that’s all I need to say when it comes to Connor.” 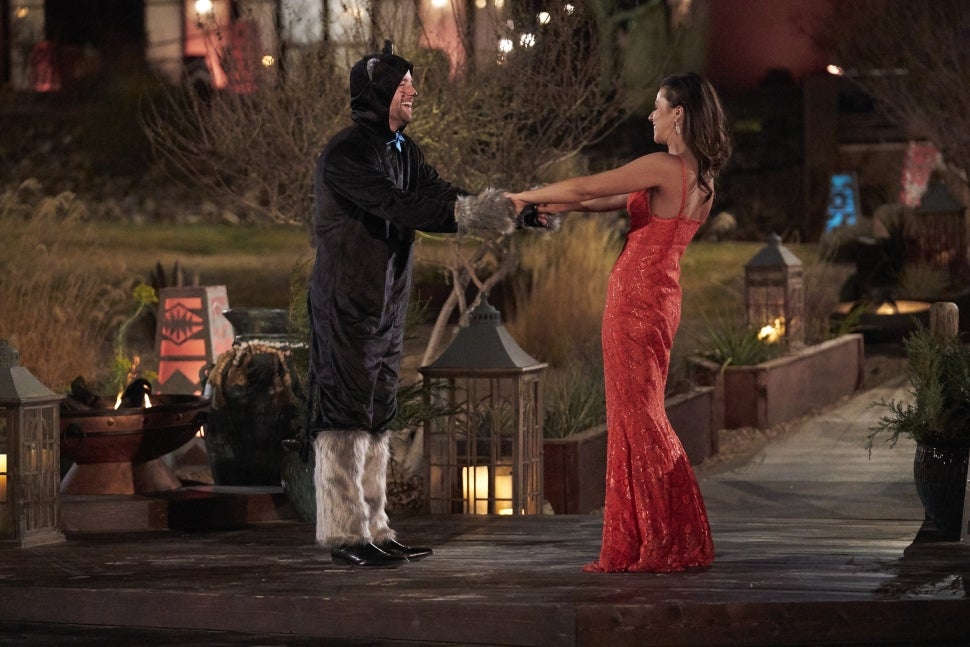 Connor B. wasn’t the only guy to get a kiss, though. Katie also kissed Justin the painter, telling ET that he “is one of those guys who surprises you. He’s very talented as an artist, but he’s very sexy and mysterious as well.”

She also kissed Greg when she gave him her first impression rose, which came after he gifted her a homemade necklace from his niece.

“I do feel there’s something there and once we can get past those nerves,” she said of Greg. “I think there’s a great guy under there.”

As for what made her hand her first rose out to Greg, Katie told ET, “Greg was just so authentically himself. He was like, ‘I’m nervous. I’m scared. I don’t know what I’m doing.’ That’s what I loved about him. He wasn’t trying to be too cool.”

Other moments of note for Katie include her playing in the make-shift ball pit with Tre, finally meeting James, who arrived in a box, learning that Michael has a 4-year-old son, and taking a tour of Jeff’s RV, before sending him, along with several, packing.

With the remaining men, Katie said that there are “so many good guys in that room, the kind of guys who have that long-term potential. I’m just really excited. I’m excited for what’s to come.” 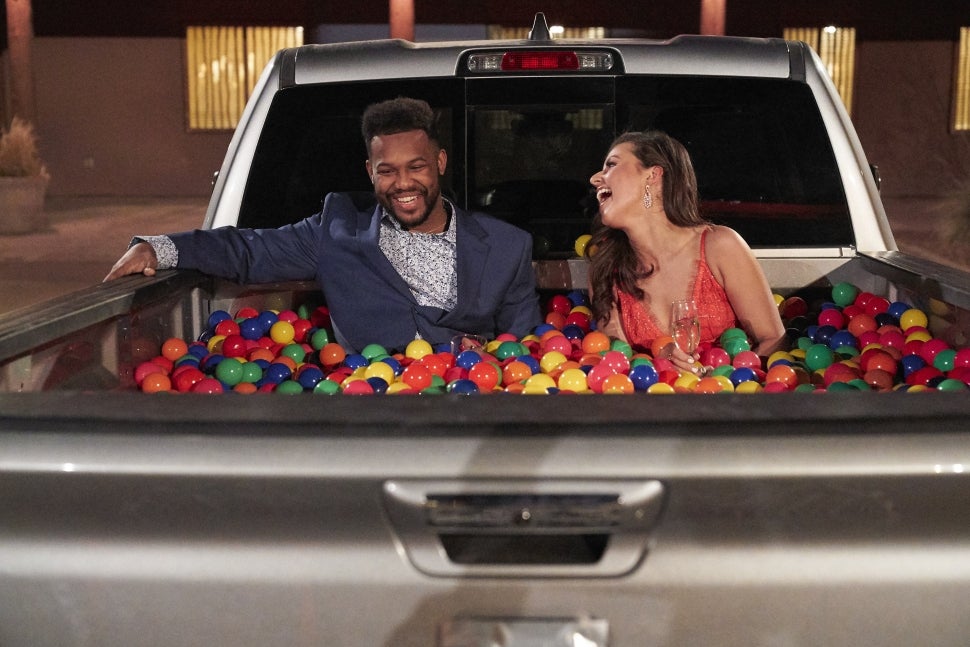 While Katie wouldn’t dish on her current relationship, she did tell ET that she falls “in love more than once” during her time on the show.

“Everything happens for a reason, and when you embrace that and let go of control then you find your happiness,” she said. “I’m engaged to myself, that’s what I’ve been saying for now. I’m very happy.”

The Bachelorette airs Mondays on ABC.