The Challenge: USA wrapped up its first season Wednesday, and while it crowned CBS’ first-ever champions, it also branded itself as “The One Where Everybody Quit.”

I admit: It’s very easy to be a keyboard warrior, watching the show from my temperature-controlled living room and comfy couch, as I armchair quarterback this whole shebang. But after 43 seasons (spinoffs included; 44 if we’re counting the Spring Break Challenge), the night’s Quit-a-Palooza was unlike anything we’ve seen before, and frankly, it wasn’t all that exciting to watch. Let’s break it all down, including who was medically DQ’d, who tapped out and who snagged that lucrative grand prize.

In the finale’s first hour, the players are well aware that the final is right around the corner, and they’re all cognizant of who they want (and don’t want) to run that last challenge with. But before that happens, there’s one more female elimination at hand and the pressure is on.

In the season’s first-ever night challenge, players swim across a lake in the dark to reach an abandoned town. There, they must solve puzzles in order to collect tokens and tires that are worth points. Whoever earns the most points, wins. And you know what happens to the lady in last…

Two guys tie for first: Tyson and Dom. Sarah takes the win for the women, marking her first individual win in her entire reality TV career. But which female is heading straight to the Arena? Angela, who spent waaaay too much time on a slide puzzle trying to earn a pink tire.

At the Arena, Tyson votes Cayla into elimination, while Sarah and Dom overrule him by throwing Alyssa in. And it’s going to be a doozy, a total Challenge staple: Pole Wrestle! Unsurprisingly, Angela destroys Alyssa in two rounds, and we finally see a rare glimpse of emotion out of BB ice queen Angela. (Well, she seemed to be crying. Were there actual tears? Think we’d need a microscope and a slo-mo rewind to solve that mystery.) 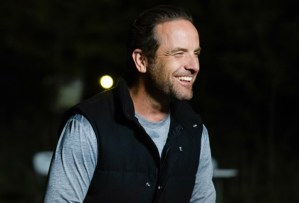 THE FINAL | As the players board a private jet to the mountains of Patagonia, Ben tells us he’s worried about his shoulder which he injured in a gnarly fall during the last challenge. Before the final even begins, TJ has some bad news: Ben is, in fact, medically DQ’d. Looks like this is one win that won’t be handed to him on a silver platter. (I said what I said!) Snark aside, you never want to see someone removed from the game like this, so I do feel for the guy.

Players will compete in teams over a series of checkpoints, plus, the Algorithm will decide the matchups. If your teammate quits, you’re also out. (Ouch!) The first pairings are as follows: Danny/Cayla, Dom/Angela, Tyson/Justine and Enzo/Desi. Sarah’s starting out alone.

CHECKPOINT #1 | They begin with a freezing swim to the shore, where they must complete a puzzle. The teams will earn a scaled amount of points based on where they finish in each mini-challenge. At the end, whoever has the most points for each gender will win.

Enzo does the unthinkable and quits mid-swim, which also takes Desi out of the running. And now a special note to all future Challengers on MTV, Paramount+ and beyond: DON’T GO ON THIS SHOW UNLESS YOU KNOW HOW TO SWIM. You are wasting your time and wasting our time. TJ hates quitters and so do we. The end. This is so, so incredibly devastating for Desi. Anyway, Danny and Cayla finish first and bank five points each.

CHECKPOINT #2 | The new pairings: Danny/Angela, Tyson/Sarah and Dom/Justine, with Cayla running solo. After a sprint, it’s time for a gross eating challenge! They have to eat an entire onion, full garlic cloves and an entire thermos of lemon juice. (But hey, at least it’s not bull testicles or monkey brains, right?) After their snack, they must do some math as they follow a series of equations. Cayla struggles hard with the eating, but keeps on fighting. Angela and Danny bank first place points on this one.

CHECKPOINT #3 | New teams: Dom/Cayla, Angela/Tyson and Sarah/Danny, with Justine going alone. Here, they must memorize a series of numbers, collect a decoder and run along a path. After adding up the numbers and using the decoder, they have to unscramble letters to form a phrase. Tyson and Angela crack the code first and win the leg, while Justine times out. 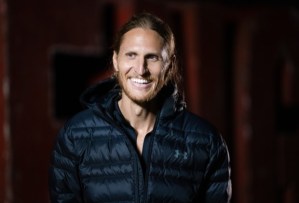 CHECKPOINT #4 | It’s now Danny/Justine, Tyson/Cayla and Dom/Sarah, with Angela alone. It’s the overnight portion, and duos must move a huge mound of dirt, while their partner gets some rest. With Angela being alone, she’s at a serious disadvantage. She opts to sleep instead, figuring she’ll take last place points in exchange for being fully charged for Day 2. Her “strategy” comes back to bite her: When TJ wakes them up bright and early, he asks her what happened, then he shockingly disqualifies her. (I don’t disagree with the decision here, but shouldn’t Justine have also been DQ’d for not completing Checkpoint 3? That feels a bit inconsistent. However, it would’ve been unfair for her to sleep all night, while everyone worked hard. I’m torn on this one. Let me know what you think in the comments.) Dom and Sarah win five points for the task.

FINAL LEG | The Algorithm is once again no more, and now it’s a brutal footrace to the top of the mountain, with some puzzles along the way. If players finish the task, the money in their individual bank accounts is theirs. Also, points for this portion are doubled, so first place gets a whopping 10 points added to their overall scores.

Tyson takes a quick lead for the men, while Justine leads the pack for the women. The second puzzle is a batch of Sudoku puzzles, and luckily for Danny, he studied them before going on Survivor. Danny scurries into first, as Tyson loses his hefty lead.

Tyson, Justine and Dom then hit rock bottom AND THEY ALL QUIT. My mouth is literally agape. The Challenge has never had this many quitters in a final. Ever. And I’m legitimately shocked. Then Cayla quits too! Sarah may still be on her first puzzle, but all she has to do is not give up and finish to claim the win.

And that’s exactly what she does. Danny makes it to the top of the mountain like a BOSS, while Sarah completes the Sudoku. She may have been one of the most unlikable players this season (facts are facts), but she doesn’t quit and that’s respectable. She becomes the only female to make it to the top, and when she does, TJ announces them as the winners of The Challenge: CBS! And since everyone else tapped out, Sarah and Danny win all of those bank accounts too, on top of their share of the $500,000 grand prize.

Did the right people win? You’ve got opinions and we want to hear ’em. Vote in our polls, then drop some comments! 31 Dec 21
It appears that Tariq’s (Michael Rainey Jr.) misdeeds have caught up with him in Power…
TV & Movies
0