You know the phrase, “putting the band back together”? Take out the “back” and you’ve got “The Eddy,” a stirring origin story of the unbreakable ties forged between up-and-coming musicians. Created and written by Jack Thorne, with “Whiplash” and “La La Land” director Damien Chazelle helming the first two episodes, Netflix’s eight-episode limited series captures the turbulent formation of a burgeoning band, alongside a father and daughter’s difficult reunion, as they all gather to play music in his struggling Parisian nightclub. Shot in a gritty, handheld, vérité style (as apt for the French setting as the jazz performances framing its story), “The Eddy” finds a compelling rhythm in a melodic blend of genres — part family drama, part musical, part thriller — that, while occasionally plodding, crescendos with considerable emotional heft.

Though each episode is framed around one of the band members, “The Eddy” primarily tracks Elliot Udo (played by the fabulous André Holland), a famous jazz pianist who retired early after the death of his son. Divorced and trying to start over, the American has been living in Paris for an unknown amount of time, trying to manage a new band and a new nightclub with his business partner and friend, Farid (Tahar Rahim). But problems are mounting. Named The Eddy after a song Elliot wrote for its house band, neither are attracting huge crowds; most club patrons attending the group’s late night sets do so to say hi to the celebrity owner, or simply sit in the back and hope he takes the stage. In the series’ opening moments, a three-and-a-half-minute tracking shot captures the shared pressure felt by Elliot, Farid, and the band as a record producer walks into the club — and their collective disappointment when he tries to leave early.

While Elliot is trying to save face, Farid is trying to save money — since one is a trained musician who can spot talent and lure influencers, the other is in charge of the books… but the books aren’t adding up. Just as Elliot starts to realize there might be an issue, in flies his daughter, Julie (Amandla Stenberg), a troubled teen who fled New York and her mom’s creepy new husband to try to follow in her dad’s footsteps and start over. She’s not particularly interested in music — not compared to her legendary father, at least — but she enjoys watching him work, walking the streets of Paris, and starting up trouble in varying extremes. Most of all, she’s a lost young woman, caught between an age when she still needs her parents’ guidance and yet is old enough to design her own identity.

Elliot and Julie anchor the opening episodes and the series overall. Helped by Chazelle’s freewheeling camerawork that reacts to their movements and hones in on each subtle expression, Holland and Stenberg create a realistic father-daughter dynamic amidst an increasingly chaotic scenario. Stenberg infuses a fidgety, unpredictable energy to her wild-card character at first, but she phases out certain mannerisms as Julie matures over the eight episodes. Holland remains one of the most exciting performers working today. As Elliot is pulled in a million different directions — asked to help his daughter, save his club, be there for the band, and rediscover himself after losing a child — Holland conveys a dozen variations of frustration and satisfaction without overextending himself. When he watches the band perform, it’s impossible not to know what he’s thinking, even when his mouth barely twitches, let alone utters a word. 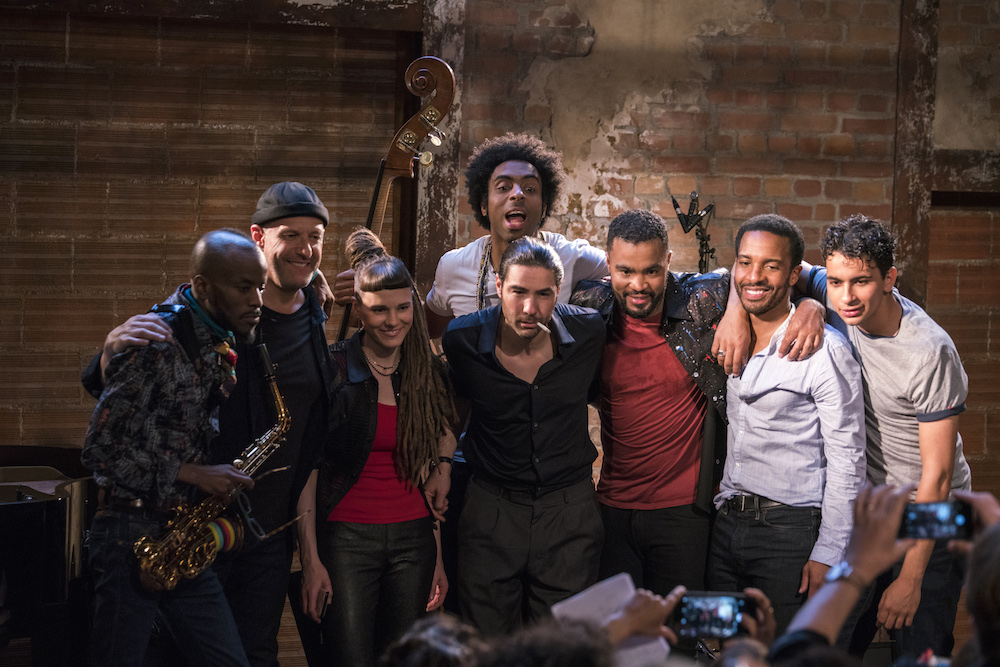 Holland’s internalized ability to communicate makes his climactic confrontations all the more powerful, but it also perfectly suits “The Eddy’s” less-is-more approach to storytelling. This limited series isn’t a passive viewing experience or something to watch while you’re scrolling Instagram. Not only do Elliot’s troubles stack up into near-thriller extremes — and an early twist introduces even more danger — but dialogue can shift between English and French mid-sentence, with subtitles filling in when needed. Thorne, who wrote or co-wrote every episode, doesn’t provide a ton of exposition, and with so much action taking place in the club (even during music-centric downtime), key decisions are made with a silent look mid-performance or even via a musical note hit by the band. Music is integral to the series’ expression, and even as a novice who hasn’t played an instrument since grade school, I could appreciate what it means to the characters, and what it means to what they’re going through.

Perhaps the biggest relief, though, is that “The Eddy” is a TV show that feels like a TV show. Given it’s a Netflix original series from an Oscar-winning filmmaker, and the first two episodes both blow well past 60 minutes, this could’ve been another casualty of the streaming era’s “let’s turn a two-hour movie into an eight-hour series” problem. Instead, each episode elevates a new character without setting aside Elliot and Julie’s ongoing story; the episodes coalesce and build off of one another; the episodes are structured like episodes, with a welcome wholeness and distinction to each entry; most of all, the ensemble starts to feel like a family, not only because “The Eddy” is about the simultaneous formation of a professional family and the reconnection of a personal one, but because the extra time provided by television creates opportunity for a rich connection between who’s onscreen and who’s watching at home.

While issues often related to filmic TV persist, like lagging tempo and slight repetition (someone should make a supercut of every time Elliot gets an unexpected phone call from a friend in crisis), “The Eddy” steadily builds pressure until things start to pop on cue. Honestly, considering how well the show introduces its cast, shapes individual identities, and crafts a fresh world from the Parisian music scene, it’s a shame Netflix bills these first eight episodes as a limited series instead of a first season. I know, I know — it seems crazy to argue a fully fleshed-out story should go further, but so much of “The Eddy’s” success stems from its talented ensemble, lived-in atmospherics, and deep love for its subject and subjects, and that’s what makes for great, ongoing TV. When the final episode reaches its moving conclusion, it brings as much satisfaction as curiosity. There could be more. After all, the band just got together. Let’s see what they can do.

“The Eddy” premieres Friday, May 8 on Netflix.