In the spring 2017, one-time “All My Children” star Catherine Eaton’s directorial debut, “The Sounding,” made its premiere at the Minneapolis St. Paul International Film Festival, where it picked up the Audience Award in the “New American Visions” section. Since then, Eaton — who also stars in the film, which she wrote with Bryan Delaney — has taken the film around the world, picking up jury awards, audience awards, and even a best cinematography win for DP David Kruta at the Woodstock Film Festival. The definition of an indie gem, Eaton’s film is finally being released more than 40 months after its Minnesota debut, offering a well-drawn character study wrapped inside an ambitious plot.

Set (and shot) mostly on the remote island of Monhegan, just off the coast of Maine, Eaton’s film conjures both a place and a people. Mostly, there is Olivia (Eaton), the only grandchild and last living family member of Lionel (Harris Yulin), a beloved former doctor who has carved out a safe, quiet life for the duo among caring friends (including a warm turn from Frankie Faison, the pair’s lawyer and best friend). Lionel raised Olivia on a steady diet of literature and philosophy — this is a film that opens with a Carl Jung quote — and her affection for the classics, especially Shakespeare, has never abated.

Others might not know that, however, because Olivia hasn’t spoken for most of her life, and Lionel long ago gave up trying to diagnose her. The arrival of Michael (Teddy Sears), the son of Lionel’s best friend and his own former protegee (incidentally, in the world of speech and communication pathology), shakes up what seemed to be a long-held acceptance of Olivia’s condition. As Lionel prepares for the next stage of his (and, by extension, Olivia’s) life, Olivia is suddenly possessed with the need to open her mouth, though it’s only Shakespeare’s words that come out.

Lionel’s motivations for bringing Teddy into the fold are fairly obvious from the start, but the script effectively builds the film into a two-hander that hinges on Eaton and Sears’ mighty chemistry and a clear interest in crafting characters with believable internal lives. Eaton’s conceit is an ambitious one — and one that the first-time filmmaker spent years assembling out of both professional and personal endeavors, including an early one-woman show to her own relationship with her mother — but the care that she applies to every facet of the production keeps it grounded. 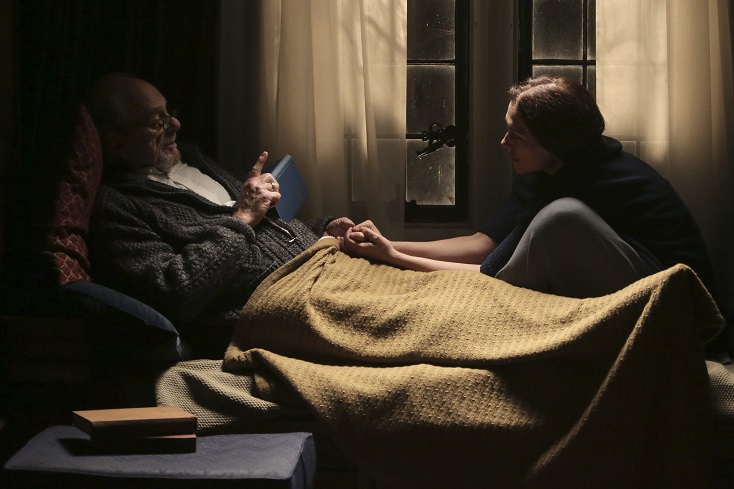 There are a few bumps in the road, particularly in the film’s first act, which has some hammy line readings and a few overwrought soundtrack choices, but “The Sounding” settles into its story and its remarkable lead performances. Early allegorical hints — both in the ways the film forces its audience and Michael to meet Olivia on her own terms, and in its clever examination of what it really means to love someone — are mined for deep emotion and even better performances.

Initially introduced as something of a curiosity (Eaton and DP Kruta literally keep Olivia behind glass, visible but wholly unknowable), the filmmaker and star steadily transform her Olivia into the most lucid of the film’s roles. Olivia is clearly seeking connection, but she is also happy to exist on her own terms — a lesson that Lionel attempts to impart on Michael, who simply can’t understand why someone would choose not to speak. Michael is enthralled by his new friend, but he can’t help seeking explanation of her “illness,” a quest that upends Olivia’s life. This draws a variety of new characters into her orbit, including David Furr as fellow doctor Ed, and ultimately lands her in an unforgiving new environment.

And yet, Olivia — and her words, carefully chosen from Shakespeare’s deep library — won’t be deterred or tamed. She leads a small-scale rebellion in the local psych ward, where she proves to be an object of adoration to many of its long-term residents, even finding a few sympathetic staff members. Still, most of the hospital’s medical professionals are all too eager to slap a diagnosis on her and move on. While there’s more material to mine there, Eaton interrogates the failings of the medical community when it comes to dealing with the atypical, unearthing a thrilling story about what it means to embrace being different.

It all builds to an expected, although still quite rewarding, showdown between Olivia (her choices, her emotions, her literary loves) and Michael (his disbelief, his feelings, his staunch adherence to logic). Few are likely to be surprised by the exchange that finally cracks Olivia’s shell and forces Michael to reckon with his understanding of the world, but that doesn’t dilute its power. Rich in its execution and careful in its approach, “The Sounding” resonates.

Giant Pictures will release “The Sounding” on various VOD and digital platforms on Tuesday, October 20.

12 Nov 20
Joe Biden has been elected the 46th president of the United States. The Democrat and…
TV & Movies
0