It’s another look at J. Edgar Hoover’s war on Black America, told with old-movie sheen — and a definite lack of subtlety 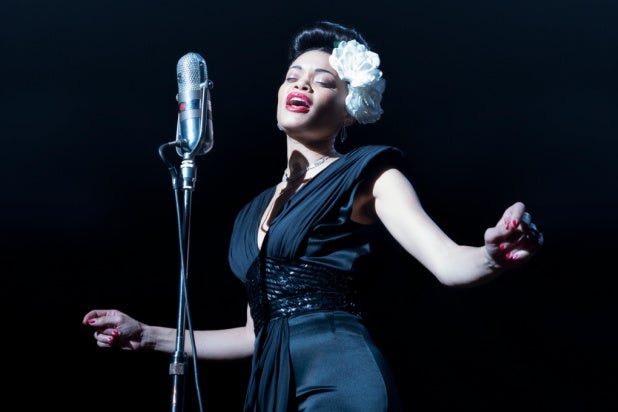 Arriving on Hulu in the wake of “MLK/FBI” and “Judas and the Black Messiah,” “The United States vs. Billie Holiday” provides yet another angle on J. Edgar Hoover’s war against Black America. And while director Lee Daniels packs in as much righteous anger as those other films, he does so with his trademark love of melodrama and disdain for subtlety.

In her first major acting role, singer Andra Day gives an emphatic and multi-shaded performance as the legendary Lady Day, but she and her talented co-stars are subject to an often-clunky screenplay by the esteemed playwright Suzan-Lori Parks, not to mention Daniels’ signature sensibility of putting too fine a point on anything and everything.

The goal is to correct the conventional take on Holiday, one of the 20th century’s greatest singers, breaking from received ideas about her drug addiction and exploring the facts about her relentless harassment by the FBI, an organization that was very interested in keeping her addicted and discredited. To that end, Parks here adapts a section of Johann Hari’s 2015 book, “Chasing the Scream: The First and Last Days of the War on Drugs.” And even if after watching the film, with its heightened, occasionally hallucinatory version of events, viewers assume they’ve witnessed more fiction than fact, the truth of Holiday’s persecution still stands.

Watch Video: Hear Andra Day Sing 'What the F-' She Wants in 'The United States Vs. Billie Holiday' Trailer

Specifically, Holiday was the obsession of Federal Bureau of Narcotics chief Harry J. Anslinger (played here by Garrett Hedlund), mainly because of her insistence on performing “Strange Fruit,” the powerful anti-lynching ballad she recorded in 1939. Anslinger, considered the architect of what would become known as the War on Drugs, targeted multiple jazz musicians for their use of marijuana — the G-man would disseminate insane propaganda about pot turning people into crazed murderers — and pursued Holiday with particular zeal, since connecting narcotics abuse to people of color was good for business and in keeping with Hoover’s racist agenda.

Daniels’ direction of this situation makes that official relationship feel like a stalker-based thriller. Anslinger always seems to be lurking around, with one or more minions in tow, waiting for Holiday to slip up and ready to push her in that direction if necessary. One of those minions is undercover agent Jimmy Fletcher (Trevante Rhodes, “Moonlight”), who gets close to her before revealing himself to be part of the FBI; nevertheless, the two grow close and, at least in this film version, he winds up being the one non-abusive love of her life. (The narrative skips over entire marriages and other events of this portion of Holiday’s life, so the depth of this relationship may or may not be factual.)

Scripted dialogue is frequently a blunt instrument. It’s the kind of movie where an interviewer (played by an elaborately coiffed Leslie Jordan) actually says, “Let’s go back to where it all began” to prompt a flashback, and an FBI agent refers to “Strange Fruit” as “People are calling the song the musical starting gun for the so-called ‘civil rights movement,’” but there are enough effective moments to balance out the exasperating ones. Whether or not Jimmy Fletcher was Holiday’s knight in shining armor, Day and Rhodes generate real sparks, and they’re game for letting the characters express themselves sexually as well as conversationally. (If much of Daniels’ storytelling sense harkens back to 1950s Hollywood, he also has a 1970s appreciation for unapologetic love scenes.)

Like Diana Ross before her, this lady sings her own blues rather than lip-sync, and Day becomes the center of attention with such ease and forcefulness that it’s easy to forget she’s a first-timer. Daniels has surrounded her and Rhodes with a superb ensemble, including Da’Vine Joy Randolph (“Dolemite Is My Name”), Miss Lawrence (“Empire”), and “Dear White People” co-star Tyler James Williams. Hedlund simmers but never finds a second dimension to his glowering, bigoted Fed, and Natasha Lyonne appears briefly as actress Tallulah Bankhead, though seemingly only to provide an under-explored subplot where the Feds try to use her intimate friendship with Holiday as another way to ruin the singer.

Daniels has a formidable eye for period detail, and his art direction and production design teams luxuriate in the 1940s of it all, from the costumes by Paolo Nieddu to the cars to the cigarette lighters. And while there are contemporary flourishes in the narrative — from the sex scenes to the flashback where young Billie, known then as Eleanora, guides a high-on-heroin Fletcher through her childhood — the musical performance scenes play like a Golden Age musical as crafted by cinematographer Andrew Dunn (“Book Club”) and editor Jay Rabinowitz (“Boy Erased”).

“The United States vs. Billie Holiday” never completely works as a drama, but it does ultimately succeed in two important ways: The film provides a launchpad for Andra Day’s exceptional acting talents as well as her gifts as a singer, and enriches the public understanding of Holiday’s persecution, funded by taxpayer dollars, for daring to speak truth to power through her art.

“The United States vs. Billie Holiday” premieres on Hulu Feb. 26.