Nicky finally makes contact with Sally, the object of his decades-long affection, in this week’s This Is Us. And she barely remembers him at first. But the way the episode ends is very different from how the episode begins: Long story short, we now know who Mrs. Nicky Pearson will be in the glimpses at the Pearson family’s future.

Of equal emotional resonance: Déja sneaks off to Massachusetts to visit Malik at Harvard, they have sex for the first time, and it’s very sweet. Speaking of which, is anyone else a little off kilter by how gently the show is easing us into its final season? Milo Ventimiglia recently warned that Episode 4 would destroy us — what if it’s nonstop heartbreak carnage from there on out?

I’m skeered. Read on for the highlights of “One Giant Leap.”

‘INCANDESCENT’ | Let’s handle Déja and Malik first. Randall and Beth think their daughter is going to stay with her friend, Tiffany, overnight. But she really hops a bus to Cambridge, Mass., to see “my boyfriend,” she tells the kindly older woman sitting next to her. Once there, Janelle runs to greet her, and Malik is equally excited. The plan: Jennifer, Janelle’s mom, will take the girl for the day, leaving Malik and Déja time to hang out. Déja is a little taken aback — she and Jennifer haven’t met before — but Malik’s ex, who’s in a rush, barely tosses out a “hey girl” to Déja before she gathers up Janelle’s things and leaves.

Déja quickly intuits that Malik is having a hard time keeping up with Harvard’s academic rigor while also being Janelle’s (very good) dad. So she tells him to take a couple of hours and finish the Russian Literature paper he’s working on, and she’ll be there when he’s done. Grateful, he takes off and returns home later to find her wearing a really great red dress. “Wow, you look incandescent,” he breathes. “OK, Harvard,” she jokes. Then he tells her that he loves her.

They go out to a party, but they’ve only been there a short time when she announces that she’s ready, both to go home and to have The Sex. Once he realizes what’s afoot, he’s super into the plan. Back at Malik’s apartment, they’re both incredibly nervous; at one point, he places her palm on his bare chest so she can feel how quickly his heart is beating. Then they kiss and lay back… and afterward, they lay tangled together in bed. “I’ll feel this way forever, just this way, with you,” she whispers. Malik’s face is in shadow, so it’s hard to tell how this hits.

On the bus home, Randall texts Déja, asking how breakfast at Tiffany’s was. She smiles as she types, “Life-changing.” 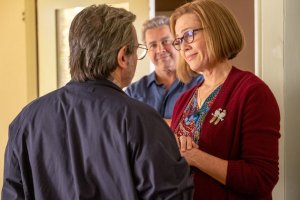 ONE SMALL STEP FOR A PEARSON… | On to Nicky! As Rebecca kind of ordered last week, she, Miguel and Nicky are going on a little trip to visit Sally — aka his pre-Vietnam War kinda-girlfriend. As they get closer, Nicky gets more and more nervous. And when they stop at a vintage shop to pick up a gift — Nick wants to bring Sally an old camera, in recognition of her love of photography — he nearly calls off the trip. The cause of his nerves is revealed when he admits that he never actually reached out to Sally, and in fact he’s not even sure if the woman they’re visiting “is my Sally.” Rebecca, who literally does not have time for this nonsense, negotiates a good price for the camera in question and points out that they’re 20 minutes away from Sally’s house, so “We’re not going to let you wuss out.”

And Rebecca makes good on that promise. She and Miguel walk Nicky to the door and, when he chokes, explain what’s going on. The very befuddled woman who answers the door is, indeed, Nicky’s Sally… but she barely remembers him at first. Eventually, their brief interlude comes back to her, and she invites everyone in. That’s when we learn that she started working for a pharmacology company in the late 1970s, she was filmed dancing topless in Martin Scorsese’s Woodstock documentary and she’s married to a guy named Eric (played by Jeffrey Nordling, Big Little Lies/Nashville). Womp-womp!

Nicky sees this as his cue to run, but Sally asks them to stay for dinner, and they eventually agree. The conversation is very odd (“You deflowered me under a moon that men had just walked on,” Nicky tells her at one point) and gets uncomfortable after Sally jokes that “For a minute there, I thought I had early-onset Alzheimer’s. Or not just early, just plain old Alzheimer’s.” Rebecca and Miguel visibly blanche, and a few minutes later, Rebecca blurts out “I do have Alzheimer’s.” She launches into a monologue about how you’d think that a diagnosis like that would make you not sweat the small stuff, but it isn’t actually the case. Sally apologizes, Rebecca says it’s nothing. Eric, Miguel and Nicky contribute by estimating how much time they’ve lost over the years, worrying about silly things. The situation eases! Then Nicky wonders aloud how long he’s spent thinking about Sally — “Decades, maybe?” — and the situation gets awkward once more! 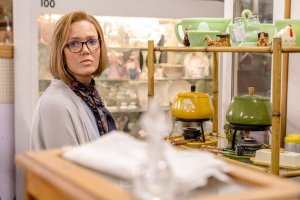 SWEATING THE SMALL STUFF | But this is an evolved Nicky we’re dealing with, because he manages to continue the conversation in a way that makes it clear he doesn’t think that time thinking of her was wasted, and how he doesn’t regret any of it. Eric jumps in with a joke and tries to move the meal along to dessert, but it seems like Sally’s got a sudden taste for truth-telling, too. “I regret buying our satellite dish. When we got it, our den became Eric’s retreat,” she tells everyone, adding that she and her husband don’t do anything together anymore. Eric asks her not to air their business in front of strangers. But Sally is ON. A ROLL.  “They’re not strangers, Eric. Nicky is an old friend who has pined after me for 50 years while you have treated me like a line cook,” she says. “I’ve known him longer than I’ve known you. The only reason I don’t bring up the small things is because the big things leave me no room to worry about anything else.”

Then Rebecca and Sally retreat to her office, where they realize they’ve both grown self-conscious about how they look; Sally wonders when they stopped wanting to see reflections of themselves. Rebecca notes that she used to love salsa dancing with Miguel, but a woman made a rude comment once, and Rebecca never went back. The women have some drinks and take some Polaroids; at the end of the evening, Nicky pockets one.

When it’s time to leave, Nicky kisses Sally on the cheek and says, “See you in 50 years?” She smiles, saying, “I’ll save the date.” In the car, Rebecca apologizes to Miguel for the ordeal ahead of him. “In sickness and in health,” he reminds her, adding that he’s “going to be amazing for you every step of the way… We’ll do this together.” Then she announces that she wants to go salsa dancing again, and we see them doing so at the end of the hour.

Rebecca also tells Nicky that the universe will put the right person in his path, and he responds that Jack would’ve liked that Miguel and Rebecca found each other.

FLASH-FORWARD! | And now for the first time jump of the final season! As Nicky’s being playfully ornery in the present with a flight attendant on his trip back to Pennsylvania (to oversee the building of that big house), the action moves to the flash-forward taking place when Rebecca is on her deathbed. Randall and Déja stand on the porch and watch as that car pulls up. The woman who gets out is named Edie… and she happens to be the flight attendant dealing with Nicky in the present storyline. Randall hugs her and thanks her for coming; she wonders how his mom is doing. “They say it won’t be long now. Everyone’s just trying to get her in time,” he answer sadly. 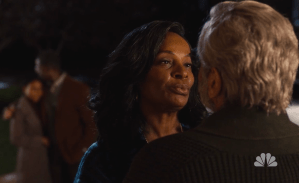 Then Nicky comes out on the porch and kisses her. “I missed you,” she says. “I missed you more,” he replies. He hugs her, hard, and as Brandi Carlile’s “Right on Time” plays in the background, we get a fleeting shot of the diamond ring on her left hand: Unless there’s some weird backflips happening here, story-wise, Edie clearly is Nicky’s wife.

In the present, Nicky flirts with Edie (who’s played by Vanessa Bell Calloway, Coming to America/Shameless) about not wanting to return his seat back to its full upright and locked position. She jokes that she’s glad she brought her duct tape with her. Then he does as she says, smiling warmly as he says, “All you had to do was ask.” My, my, my… Nicky has a little game in him, after all!

Now it’s your turn. What did you think of the episode? Sound off in the comments! 14 May 21
Is another fight brewing between Kim and Kourtney Kardashian? Things got tense in a preview…
TV & Movies
0