The second season of Zoey’s Extraordinary Playlist opened with a powerful a cappella performance of Andra Day’s anthem, “Rise Up,” beautifully performed by Alex Newell’s Mo, in order to inspire Jane Levy’s Zoey to start carrying on with her life following her dad’s death. A strong start to a new season that also plants a flag for Newell, whose character won’t just be Zoey’s stylish best friend.

“We’re finding Mo more independently outside of Zoey and not always being the best friend this season and what that means. Finding the interests that Mo has and finding out who this everyday person is,” Newell tells ET. Tuesday’s episode delves deeper into Mo’s past commitment issues, as he and Max (Skylar Astin) hit a wall over the new app they’ve teamed up on over an unpleasant work experience with a friend.

Ahead of a new episode, Newell discusses going back to work amid a pandemic, why he hasn’t made any personal song requests on the show and the joys of exploring Mo’s new working relationship with Max.

ET: What’s it been like getting back into the swing of things?

Alex Newell: It’s great. It’s so nice to be filming a second season of something that really hits close to home and is something that I do appreciate and love, and to be fortunate enough to do it in the middle of a pandemic is nerve-wracking, but I can say that we feel very safe. At least I feel very safe on set doing it every day.

Did you have any conversations with creator Austin Winsberg or any of the writers in between seasons in terms of what you were interested in having Mo go through or the show exploring?

It’s strange, there wasn’t much conversation in between seasons. But now we started everything, my opinion does kind of matter with some of the stuff that we’re talking about and wanting to put Mo through this season, which is nice.

There have been a lot of changes with where the characters are at the start of season 2. Can you speak more specifically to what Mo will get into this year?

There’s a lot! We’re finding Mo more independently outside of Zoey and not always being the best friend this season and what that means. And finding the interests that Mo has and finding out who this everyday person is really. You know what it really is? I always love to see stories about people that have moved past their hurts, but still have a little piece of it through them. And that’s a testament to who they are, that we are seeing a glimpse into what they did build through that made them who they are today. That is kind of the backstory that we’re getting from Mo in episode two.

Mo is also teaming up with Max professionally on a genius restaurant app idea, but they approach the opportunity very differently because of who they are. What can you tell us seeing them work together more?

I really think that it’s showing that a queer person and a heterosexual person can be friends and work together and coexist, especially our timing now. That a person of color and a white person, we can get along and we can see each other without having to see just the color of who we are. I think there are two sides of that coin, of that friendship, and that partnership really. This season, there’s a lot of finding that footing. Oh, get ready. There’s a lot of stuff that Max and Mo do. So, buckle in. 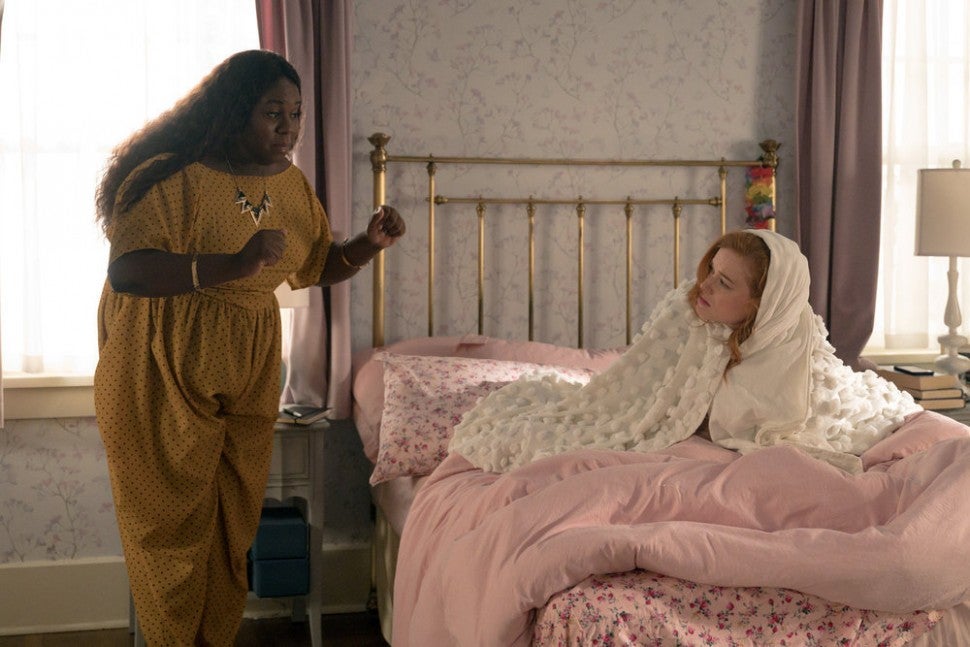 We haven’t seen Mo embarking in a steady job yet, though he’s been a DJ. Also, the restaurant app idea is genius. What excited you seeing your character actively having a career mindset?

When I got the script, I was like “All right, yeah. Let’s do it.” And then I found out what the app idea was and I was just like, “Huh!” There was a bar that I frequent in New York that when the kitchen is closed, they always let me order food seamlessly. And I said, “There should be a restaurant that is like that,” that just lets people order food in, too. I was very excited and I was like, “Actually, I would love for this to be a thing.” If I had investor money, I probably would make it a thing. It is nice to see Mo in this capacity because we haven’t seen Mo holding a real job. But also still having this independent freedom of being a business owner and being your own boss, and being their own person in power, rather than always answering to somebody else.

Mo and Eddie’s relationship status, or lack thereof, was briefly addressed in the premiere. Were you bummed that that romance wasn’t able to continue? Are they over?

When I first got this role, I had a conversation with Austin and I really wanted to show this person that is not coined as someone being a sexual being, someone’s not being someone that dates around. Like, this person was never deemed that person. I really wanted to deem this person that person. I wanted to explore different relationships and we did it last season. The testament to showing that love or that infatuation or that “right now” kind of relationship with Eddie was something that is real world for a lot of people. That it comes, it is what it is and then it either continues or it stays away and we’ll see where it goes. But I know we teased it in a teaser, but Mo is starting a new relationship with someone else further down the line.

I love seeing Mo in love.

Yeah, I mean, it could be Zoey for all I care. Pushing it for it to be Zoey!

You’ve already had a memorable musical moment this season with “Rise Up” in the premiere. Were there any personal song requests that you got into the show this year?

I am the last person on this show that asks for a song. I’m the first person to be like, “Do I actually have to sing? Do I have to sing? But, do I really have to sing?” It’s strange, but I have been singing my entire life and I have so much joy watching other people do it. Yeah, I love singing. Yes, I love dancing. And I do it, but “Aren’t people sick of hearing me sing?” And the answer is no. Thank God people aren’t sick of hearing me sing! But no, I don’t ask for songs. I really don’t. Because there’s something about letting someone else pick the song for you and then you have to pull up and sing it. I’m very fortunate enough that I’ve learned so many different styles of music and how to sing them or, better yet, how to sound on them. And I’m still learning at the end of the day. I really think that being on the show and not asking for a song really furthers my education with my voice and singing in general.

Is there a musical number down the line this season that you’re excited for people to see, or that you were floored by?

Probably, it will still be “Rise Up” for me, opening the season. There’s so much power in the stillness of not having to sing on top of a track, where you can just be intimate with the voice and still make it beautiful. It’s still something that I adore to this day.

Lastly, what are Mo’s thoughts on Zoey and Max sort of making it official?

Mo is like, “Girl, whoever makes you happy. Just pick one already!” That’s really where Mo’s at right now: “Just, please, pick one. Pick somebody.”

Zoey’s Extraordinary Playlist airs Tuesdays at 8 p.m. ET/PT on NBC. For more on the series, watch the video below.